WASHINGTON -- Holding flowers and loaves of bread above their heads, an interfaith coalition of Christians brought their witness for peace and prayers for justice to the U.S. Capitol. Nearly 250 of them were promptly arrested.

In one of the largest religiously oriented peace demonstrations in a decade, nearly 1,000 demonstrators -- Roman Catholic, Lutheran, Episcopalian, evangelical, Mennonite and others -- rallied Monday at the foot of the Capitol for what Del. Walter Fauntroy of the Distict of Columbia encouraged as a 'necessary' and 'disciplined witness' against the arms race.

The demonstration was a part of Peace and Justice Week, a weeklong, nationwide series of demonstrations, religious services, and teach-ins on nuclear war. The actions are sponsored by a broad coalition of religious groups including the National Council of Churches, the Sojourners Fellowship, the Catholic Worker Movement, Clergy and Laity Concerned, and Fellowship of Reconciliation.

As the House and Senate debated deployment of the controversial MX missile, the demonstrators conducted a quiet, sober, liturgical protest. Many of those taking part, and close to half of those arrested, were priests, clerics, nuns, brothers and other religious professionals.

A Washington city police officer at D.C. Superior Court where the demonstrators were being processed Monday night on an 'unlawful conduct' charge, said some had posted $100 bond and others were freed on their own recognizance. Still others were expected to spend the night in jail and face court in the morning.

'I think its great,' said 16-year-old Amy Jersild, as she and her brother Aaron watched their father led to a paddy wagon. 'I wish we could have been a part of it. It is a way to show he's against the arms race. It is a way to have an impact on the world.' Paul Jersild, the former academic dean of Wartburg Seminary in Iowa, is a senior fellow at the Churches Center for Theology and Public Policy Policy at Wesley Seminary in Washington.

As he was led away, a group of demonstrators applauded, as they did for each of the 242 arrested -- and sang 'We Shall Overcome.'

Janet Hansted, Long Beach, Calif., a Lutheran seminary student, joined with others in singing the anthem and said: 'I hope this means that we can someday sing this song in the past tense.'

Before the arrests began, Capitol Police Capt. M.P. Morrison, warned the demonstrators through a bullhorn: 'I must inform you that it is unlawful to pray, demonstrate or picket in any of the Capitol buildings.'

Jim Wallis of the evangelical Sojourners Fellowship, responded: 'Legal or not, we are here to pray for peace.'

Some said the Lord's prayer, others said 'Hail Mary's and still others sang the opening lines of the famous 'Prayer of St. Francis' - 'Lord, make me an instrument of thy peace.'

And they sang: old spirituals with new words like, 'I've got peace like a river in my soul,' and new songs with an old message like, 'They'll know we are Christians by our love.'

Pentecost, in most Christian churches, celebrates the formation of the church and the day, according to the Biblical book of Acts, when the Holy Spirit descended on the apostles.

Paul Stookey, of the 1960s singing group Peter, Paul and Mary, led the crowd in singing Bob Dylan's 'Blowin' in the Wind,' a song that uses one of the major symbols of Pentecost -- the Holy Spirit as wind. 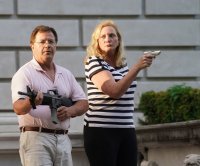