The 21-member executive committee of FIFA made its unanimous decision after hearing last-minute statements from Mexico, the United States and Canada, the three candidates eligible to replace Colombia as host. The South American nation withdrew for financial reasons last October, having been awarded the tournament in 1974.

Mexico will be the first country to stage the event twice, having held the finals in 1970.

While offering congratulations to Mexico, the U.S. and Canadian delegations expressed deep criticism of the FIFA special committee for not visiting their respective countries to inspect the stadiums and facilities.

'We regret that the special committee didn't visit us as we requested,' said former Secretary of State Henry Kissinger, who aided the American delegation in its attempt to bring the finals north of the Rio Grande. 'We have the backing of our President and a unanimous Congress, which is more than President Reagan usually can achieve.'

George Schwartz, chairman of the Canadian World Cup Bid Committee, was as critical as Kissinger.

'We were led to believe that nine stadia was enough,' Schwartz said. 'Naturally we have several more stadia in reserve, but the executive committee would not consider them.'

'This document is just a joke,' he said of the Mexican entry.

Hermann Neuberger, president of the FIFA special committee for the 1986 World Cup, said the same questions were put to all three candidates, but only Mexico answered them fully when the time limit expired.

'It is quite clear that Canada and the United States did a fine job, but they failed to reply to some important details,' Neuberger said.

'The only complete document came fromMexico, which was why we unanimously decided to give Mexico the games,' he said.

'It was not necessary to inspect their facilities as they had not fulfilled our conditions,' he said in reply to the critical voices of Kissinger and Schwartz.

Joao Havelange, the FIFA president, said the two nations had made far better presentations at the meeting in Stockholm, but out of fairness to Mexico they could not be considered.

'There is no time for a further postponement of our decision,' Havelange said.

Havelange rejected all criticism of the selection process, which he said was 'more than democratic,' with all continents being represented on the executive committee.

But Jim Fleming, president of the Canadian Soccer Association, said: 'We will have to reassess the process of selection for the World Cup in 1986.'

The Mexican delegation, confident from the beginning, was jubilant at the unanimous decision.

'I never thought the decision would be unanimous,' said Rafael del Castillo, president of the Mexican Football association.

'Mexico fulfilled all the rules and we were able to give all the necessary government guarantees,' he said. 'It will give our players opportunities to learn from better players. And for the Mexican people it will be a good fiesta.'

The United States has a history of strained relations with FIFA. The U.S. Soccer Federation, America's only official link to FIFA, was almost kicked out of the world body because of controversial rule changes by the North American Soccer League.

USSF president Gene Edwards, whose delegation included soccer greats Pele and Franz Beckenbauer, said having the World Cup in the United States would have provided a boost for the sport.

'Naturally, we are very disappointed.' he said. 'We feel the United States was the strongest of the three candidates. We feel that we submitted a very professional presentation. Had we received the bid it would have added tremendous impetus to further the growth and development of soccer in this country.' 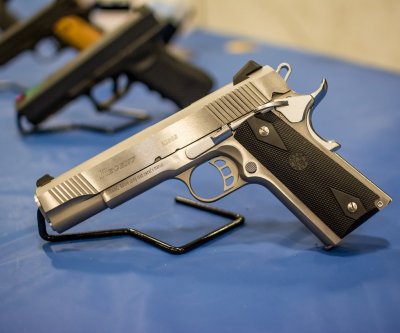 Health News // 8 hours ago
Study links pandemic fears to gun sale surge in California
Citing fears over violence and chaos, more than 100,000 Californians have bought guns in response to the COVID-19 pandemic, a new study estimates.