CLEVELAND -- Most pupils used their class assignment to write poems or short stories, but Christopher Shaffer related a 125-year-old account of how an ancestor broke Abraham Lincoln's nose.

Christopher, 11, a fifth-grader at the Millridge Center for the Hearing Impaired in suburban Highland Heights, Ohio, submitted an illustrated, 11-page booklet titled 'The Broken Nose ... a True Story.'

The tale, about his great-great-great grandfather Sullivan M. Cutcheon, has been passed down through the generations and his mother Cherie says it's backed up by letters and an autographed picture of the former president.

According to Christopher's book, Cutcheon met Lincoln after moving to Springfield, Ill., to become superintendent of schools in the 1850s.

Cutcheon and Lincoln, at that time an attorney, became good friends and occasional recreational sparring partners.

One day in 1858, Christopher wrote, Lincoln and Cutcheon were sparring behind Cutcheon's house. They were laughing as they punched each other, but one of Cutcheon's blows hit Lincoln and broke his nose.

After Lincoln left Springfield for the White House, he sent Cutcheon a few letters and an autographed photograph, which Mrs. Shaffer says are kept in a safe-deposit box.

She says the picture, showing a clean-shaven Lincoln and signed, 'Yours truly, Abe Lincoln,' has been authenticated by historians.

Christopher, who wants to be an artist when he grows up, illustrated the booklet with colored-pencil drawings, including one which shows two men shaking hands and another of a bandaged nose. 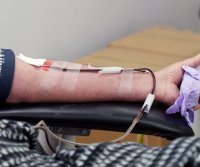 Health News // 33 minutes ago
Plasma treatments only effective in some COVID-19 patients, study finds
Jan. 25 (UPI) -- Using blood plasma collected from patients who have recovered from COVID-19 to treat those actively battling the virus only works in some cases, an analysis published Tuesday by JAMA Network Open found.

Health News // 1 hour ago
Vaccination plus infection creates 'super immunity' against COVID-19, study finds
Jan. 25 (UPI) -- Contracting COVID-19 after becoming fully vaccinated and or becoming vaccinated after being sickened with the virus provide strong immunity against future infection, a study published by the Science Immunology found.

World News // 1 hour ago
At least 8 dead, several hurt in Cameroon after stampede during major soccer tournament
Jan. 25 (UPI) -- A rush of fans outside of the Africa Cup of Nations soccer tournament in Cameroon on Tuesday has killed at least eight people and sent several others to the hospital with serious injuries, officials said.