BOSTON -- The skyrocketing increase in drug abuse could be curbed if American society placed as high a value on family structure as it does on career and money, a psychiatrist said today.

Many children of broken homes turn to drugs to fill the moral, spiritual and emotional needs once filled by the family, a psychiatrist wrote in the New England Journal of Medicine.

'It's very sad because many of the drugs offer things like the ability to love and feel closer to people,' said Dr. Armand M. Nicholi Jr., of Massachusetts General Hospital and Harvard Medical School.

He said colleges teach everything but how to live our lives. Schools, businesses, medical schools and hospitals are all 'anti-family,' he said, and require a 100 percent commitment from the individual.

'We need to place a high priority on the family. Our society places emphasis on career. Success and making money are more important than the family,' he said.

'We need a major revolution,' he said.

Studies indicate American parents spend less time with their children than in any other nation except England, he said.

'The absence of a parent through death, divorce, or a time-demanding job contributes to many forms of emotional disorders, especially the anger, rebelliousness, low self-esteem, depression and anti-social behavior that characterize drug users,' Nicholi said.

About 13 million children live in a home with one or both parents missing, he said.

He said drug users differ markedly from the rest of the population and the character traits and emotional conflicts they display reflect recent changes in child rearing and family stability.

About 9 million Americans have used sedatives without prescriptions, and 13 million have used amphetamines. One in five young adults reports using stimulants for non-medical reasons, he said.

The list of drugs is long; the list of side-effects is longer, he said, and many suicides, murders, crimes and automobile accidents were committed by people on drugs.

'I've seen people growing up in parentless home, they have a much lower tolerance for stress. The whole drug phenomenon is an expression of this frustration, anger, depression and anxiety,' he said. 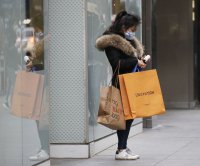 Health News // 6 hours ago
Poll: Half in U.S. still not wearing masks when out in public
Though masks are effective in stopping the spread of COVID-19, half of Americans don't wear them when mixing with the public.

Science News // 13 hours ago
Tiny particles formed from trace gases can seed open ocean clouds
Jan. 22 (UPI) -- It doesn't take much to seed a cloud in the atmosphere above the open ocean, according to a new study published Friday in the journal Nature Communications.

Odd News // 14 hours ago
Airplane wheel crashes down in Chicago neighborhood
Jan. 22 (UPI) -- Authorities in Chicago confirmed a wheel fell off a small plane over the city and landed in the front yard of a resident's home.