LOS ANGELES -- Singer Karen Carpenter, who died Friday at age 32, suffered from anorexia nervosa, a disease that strikes typically weight-conscious teenagers and develops into a potentially fatal obsession that starves its victims.

'Anorexia is a psychiatric disorder,' Dr. Marvin Gillick, a child psychologist at County-USC Medical Center said. 'It is psychogenic malnutrition.'

'The person doesn't eat because of psychological disturbances in their view of themselves and the world around them. It is a relentless pursuit of thinness.'

Miss Carpenter suffered from anorexia nervosa for several years, friends and business associates said. Although a two-hour autopsy failed to determine an exact cause of death, several psychiatrists told UPI the disease places great strain on the heart and other organs.

'In all cases there are potential cardiac problems,' said Dr. Charles Portney, an assistant professor of psychiatry at the UCLA Medical School.

Portney said it was not unusual to find anorexic victims with arhythmia, microcardia and edema -- all serious heart conditions.

'It essentially has the same effect on the body as any kind of starvation -- lower blood pressure, lower body temperature, hair loss, loss of menstrual cE:le, the protein in the blood goes down,' Portney said.

'Karen considered herself well but Debbie was concerned for her ... Debbie said she had noticed Karen had put on some weight. I'm sure Karen felt she had gained weight and was conquering it.

Most anorexics are teenage girls from middle- and upper-class backgrounds.

'Most of the people who have the condition are perfectionists,' Gillick said. 'The girls who have the disorder are frequently energetic - even though the body is wasting they are bubbling over with energy.'

'They start to digest their own nervous system,' he said.

'All of the sudden they don't see themselves realistically any more than they see they're bodies realistically ... With all the talent she (Miss Carpenter) had to offer the world, did she really believe it?' Mrs. Boone asked.

The American Psychiatric Association Diagnostic and Statistic Manual of Mental Disorders lists five criteria that a patient must exhibit before the age of 20 to be diagnosed as anorexic:

-Intense fear of becoming obese which does not diminish as weight loss progresses.

-Disturbance of body image, claiming to feel fat even when emaciated.

-Weight loss of at least 25 percent of original body weight.

-Refusal to maintain body weight over minimum normal weight for age and height.

-No known physical illness that would account for weight loss.

Odd News // 13 hours ago
Man finds box of $27,000 outside Michigan credit union
Jan. 23 (UPI) -- A Michigan man leaving the drive-through ATM at a credit union investigated a plastic box in the middle of a road and discovered it contained $27,000.

Odd News // 15 hours ago
Maryland woman collects her second lottery jackpot
Jan. 23 (UPI) -- A scratch-off lottery ticket sent a Maryland woman to the winner's circle to collect a jackpot -- for the second time.

Odd News // 20 hours ago
Puppy rescued from spare tire predicament in California
Jan. 23 (UPI) -- Animal rescuers in California said they saved a puppy found with its head stuck through the middle opening of a spare tire. 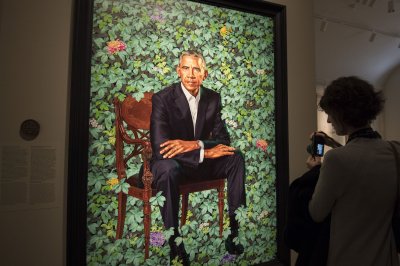