A nuclear submarine was put on notice today for...

HONOLULU -- A nuclear submarine was put on notice today for possible use as a power source to areas of the Hawaiian Islands ravaged by Hurricane Iwa and Gov. George Ariyoshi sought a federal disaster declaration to help pay for almost $200 million in damage.

Navy officials put the nuclear-powered attack submarine USS Indianapolis on four-hour notice, readying the vessel to sail at a moment's notice to the island of Kauai to supply power from its giant nuclear reactor.

Navy officials flew into Kauai on Thursday to inspect the docking facilities in Nawilili Harbor area and see if using the submarine was feasible.

The submarine's power plant could provide 1,500 kilowatts of power for Lihue, on the island.

Officials from the Federal Emergency Management Agency were scheduled today to begin a detailed assessment of the damage on the islands of Kauai and Oahu.

Ariyoshi said Thursday he was 'shocked' when he surveyed damage on Kauai by helicopter and said at least 10 generators were needed to provide emergency power. Four generators have been shipped to Kauai so far.

He said a big concern was supplying water to the people since there was no electricity to operate pumps.

Ariyoshi also flew over the privately owned island of Niihau Wednesday. While there was no formal damage report from the island, the governor said damage was 'very, very severe.'

Despite the apparent severity of damage, the Robinson family, which owns the 24-by-6-mile island, reported there were no casualties and no need for a state inspection of Niihau. The island has a population of 226.

Ariyoshi began the paperwork to declare Kauai and Niihau disaster areas, making them eligible for $1.2 million in state aid. He said a portion of Oahu also may be declared a disaster area, depending on damage reports.

The declaration would make the battered islands eligible for millions more in grants and low-interest loans for repairs and cleanup of damaged caused by Iwa, which killed one person.

Anne Streeter, spokesperson for Hawaiian Telephone Co., said at least 50 percent of Kauai was still without telephone service and it is unknown when service will be fully restored.

Telephone crews also worked to restore service in devastated areas of Oahu, but Streeter said many homes would not have service for some time until individual lines are fixed.

The storm struck the islands with 110-mph winds Tuesday night, driving 7,000 people from their homes, demolishing residences and businesses and uprooting trees and powerlines.

A preliminary report estimated $4 million in damages among the hotels on famed Waikiki beach.

A two-story wing of the Sheraton Kauai Hotel at Poipu disappeared into the ocean, while waves surged through rooms in the older beachfront section of the hotel.

'The entire island looks as though it was mowed with a giant hedge trimmer,' said Julia Neal of Lihue.

Odd News // 8 hours ago
Horse rescued from frozen pond in Michigan
March 2 (UPI) -- Authorities in Michigan came to the rescue of a horse that was trapped in the frigid waters of an icy pond on its owner's property. 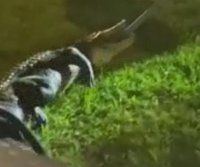 Odd News // 10 hours ago
Florida couple find 7-foot alligator lurking in garage
March 2 (UPI) -- A Florida woman said she thought her husband was playing a practical joke on her before she opened her garage door and saw the 7-foot alligator for herself.

Odd News // 10 hours ago
Florida police officer rescues coyote struggling to swim to shore
March 2 (UPI) -- A police officer in Florida came to the rescue of a swimming coyote by using a patrol boat to guide the struggling canine back to shore.

Odd News // 12 hours ago
Texas woman runs 15 days in a row for half-marathon world record
March 2 (UPI) -- A Texas woman broke a Guinness World Record for most half marathons run on consecutive days when she ran a full marathon followed by 14 days of half marathons.