A funeral was scheduled Thursday for writer Leicester Hemingway...

MIAMI BEACH, Fla. -- A funeral was scheduled Thursday for writer Leicester Hemingway who, like his brother -- the prize-winning author Ernest -- and his father, committed suicide because of failing health.

Hemingway, 67, shot himself once in the head Monday afternoon while alone in his Miami Beach home, authorities said. A police spokesman said he apparently was depressed over his failing health. Both his brother and father killed themselves for the same reason.

'His family said he had been despondent because of past operations and the prospect of more operations,' said police spokesman Tom Hoolahan.

Hemingway had been in the hospital five times since February, when he suffered a heart attack while on the Bahamas island of Bimini and was rushed home to Miami.

Hemingway had an artificial artery placed in one leg in March because of blocked arteries and poor blood circulation aggravated by diabetes, the family spokesman said. He had another implant placed in his other leg in April, and then had the first implant cleaned in June.

He also had his prostrate gland removed in August.

Hemingway was the author of numerous magazine articles and six books, including a biography of his Nobel prize-winning brother. He also published The Bimini Out Island News, a small fishing report.

He described the newspaper as 'the smallest newspaper in the world' and 'the only newspaper that takes two editions to wrap a bonefish.'

Ernest Hemingway, winner of the Nobel Prize in 1954 and the Pulitzer Prize in 1953, shot himself in the head with a shotgun in 1961 because he was depressed over his deteriorating health. Their father, Dr. Edmonds Hemingway, ended his life during a period of depression over illness.

Leicester Hemingway's funeral is set for Thursday morning at St. John's United Methodist Church on Miami Beach. His body is to be cremated.

Surviving him are his wife, Doris; two daughters, Anne Hemingway Feuer, and Hilary Hemingway, both of Miami; two sons by a previous marriage, Peter of Saskatchewan, Canada, and Jake of Maryland; and two sisters, Sunny Miller of Michigan, and Carol Gardner of New Hampshire. 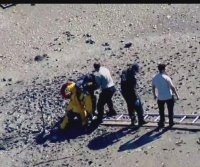