WASHINGTON -- Education Secretary Terrel Bell said Wednesday his department will cut National Direct Student Loans to schools with high default rates and begin a crackdown on federal employees who are late in paying back their student debts.

Bell said the department collected $45 million in back debts on various loan programs last year, expects to collect $55 million this year and is setting a goal of $80 million for 1983.

Embarrassed by disclosures more than 37,000 student delinquent borrowers are federal employees, Bell said his agency will match loan records against employment files on 10.3 million current and retired federal workers. He said he expects all agencies to be 'aggressive' in seeking repayment.

At hearings last week, Sen. Charles Percy, R-Ill., called the situation 'outrageous.' He cited the case of a $34,000-a-year Education Department lawyer who has declared bankruptcy and is therefore not liable for repayment.

Bell signed new rules for the National Direct Student Loan program that he said will 'play hardball' with 1,300 schools with default rates above 10 percent.

The 528 schools with defaults above 25 percent would get no new loan money out of the $180 million appropriated for next fall. The rest will have grants cut by the amount they should have collected, but did not. The 1,600 with low default rates will not be affected.

About 1.2 million students are in default -- 120 days late -- in repaying $896 million and the national default rate is now 16 percent. The loans go to needy students.

'I hope I don't sound sadistic about this,' Bell told a news conference. 'The economy is tough and people are struggling. But if we're going to do a better job on this program, we're going to have to manage defaults.'

Congress has 45 days to veto the regulations, but a congressional aide said disapproval appears unlikely. Some members are disappointed the rules do not exempt schools that cut their default rates by large amounts, even if the total rate remains high.

Schools run the direct student loan programs and are responsible for collecting repayments, but can turn over debts to the federal government for collection. Bell said that would enable schools with high default rates to stay eligible for new loan money.

The government's major aid program is the guaranteed student loan, which has a 10.3 percent default rate. About $1.7 billion is in default by students. Loans are made by banks; a delinquent debt is collected by state agencies and the federal government

Health News // 34 minutes ago
Number of acute hepatitis cases in children rises to 180 in U.S.
The number of American children affected by acute hepatitis of unknown cause continues to grow, the U.S. Centers for Disease Control and Prevention said on Wednesday.

World News // 38 minutes ago
Russian exit: McDonald's says franchisee will buy its locations
May 19 (UPI) -- Just days after announcing that it was getting out of Russia, fast-food giant McDonald's said on Thursday that it's found a buyer for hundreds of locations in the Eastern European country.

Health News // 43 minutes ago
CDC recommends masks in areas with high COVID-19, including a third of Americans
Masks may not be required, but Americans should consider wearing one anyway if they live in an area where COVID-19 case numbers are high, federal health officials said Wednesday.

Health News // 1 hour ago
U.S. doctors often mistreated by patients, families, study finds
May 19 (UPI) -- Nearly one-third of doctors in the United States have experienced mistreatment from patients or their families, including racist or sexist remarks, a study published Thursday found. 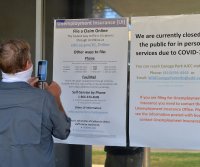 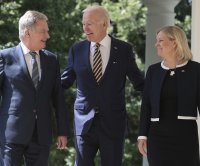 U.S. News // 1 hour ago
Police search for gunman after shooting kills 1 at Tennessee HS graduation
May 19 (UPI) -- Police say that one person was killed in a shooting late on Wednesday at a high school graduation ceremony in central Tennessee, and another person was seriously injured by the gunfire.
Advertisement