The Russian cruise ship M.V. Odessa made its last...

'We just learned of it yesterday and we were shocked,' said passenger Nancy Taylor of the restrictions. 'We are so glad they let us come back to our own land.'

American holiday-makers, who left New Orleans on the Odessa the day after Christmas for a weeklong Caribbean cruise, said the Soviet crew offered no opinion of the sanctions that banned the ship from U.S. waters.

'There's no Cold War on the ship,' said passenger Guido Coolman after the liner docked about 8 a.m. CST. Later the ship left its home port and sailed for Europe.

The Odessa was originally scheduled to pick up a new load of passengers for a cruise through the Panama Canal to Los Angeles. But President Reagan's economic sanctions against the Soviet Union for its role in the Polish crackdown have changed those plans.

State department officials said the Odessa would not be permitted to return to the United States on future cruises in accordance with the administration's policy toward the Soviet Union.

About 400 Americans were scheduled to board the Odessa for the 19-day cruise to Los Angeles, but most either switched to other cruises or returned home, said Larry Champagne, president of TLC tours of New Orleans.

Champagne said he was unsure whether money could be refunded to people who canceled. He said his company would lose between $60,000 and $100,000 because of the canceled tour.

'It will affect the tourism trade from bell boys to cabbies to hotel operators to restaurants,' he said.

American wholesale tour operators already have paid the Soviet Union for rooms on the Odessa and will never get a refund if the tour is canceled, Champagne said.

'When you add it all up, you have more Americans losing money than Soviets,' he said.

Shortly after the ship docked, U.S. Customs agents issued citations to a CBS reporter and two freelance photographers for boarding the Odessa and violating a law prohibiting contact with passengers before they had been :leared to enter the country.

The three men will be fined, a Customs official said.

A couple from New York traveling on the Odessa said they decided New Year's Day to circulate a petition admonishing the Reagan administration. Harry and Helen Harrison of Freeport, N.Y., said they collected more than 100 signatures by passing the document around.

'This policy of punishing the crew and vessel will only lead to further disruption of friendly relations,' the petition read in part. 'While our two governments are meeting in Geneva on issues of disarmament, we ought to refrain from enlarging our disagreements.' 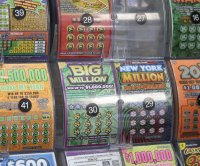 Odd News // 9 hours ago
Wedding ring found in septic truck returned to owner
Jan. 25 (UPI) -- A New Hampshire septic company found a wedding ring while cleaning out a truck and was able to return the beloved item to its relieved owner.