Rick Sutcliffe got his wish to be traded Wednesday....

HOLLYWOOD, Fla. -- Rick Sutcliffe got his wish to be traded Wednesday. Soon, a similar request may be granted to All-Star shortstop Garry Templeton.

Sutcliffe, the 1979 National League Rookie of the Year, asked the Los Angeles Dodgers to trade him last September after he was left off the post-season 25-man roster following a mediocre regular season.

The Dodgers finally got around to dealing the 25-year-old right-hander at the baseball meetings Wednesday, sending him and infielder Jack Perconte to the Cleveland Indians for outfielder Jorge Orta and a pair of minor leaguers -- catcher Jack Fimple and pitcher Larry White.

A deal involving Templeton of the St. Louis Cardinals and possibly shortstop Ozzie Smith of the San Diego Padres could be finalized today.

Both San Diego and Baltimore are hard at work trying to land Templeton. The Orioles, who have met with Cardinals' general manager nine times in two days, are prepared to offer pitcher Sammy Stewart, shortstop Bob Bonner and highly-regarded minor league outfielder Jack Shelby as part of a package for Templeton and outfielder Sixto Lezcano.

San Diego, however, may offer the Cardinals a better deal. The Padres reportedly are willing to include Smith and pitcher Steve Mura in a deal for Templeton and Lezcano. The Cardinals, though, may have to come up with a pitcher to complete the trade.

In another development Wednesday, the New York Yankees, for the second day in a row, made some news by signing a manager. On Tuesday the Yankees announced that Bob Lemon would return to manage the club next year and Wednesday they announced that Gene Michael, whom Lemon replaced as manager last Sept. 6, would return as manager in 1983.

The Dodgers-Indians trade gives Los Angeles a much needed left-handed bat and some extra bench strength. It also enables Cleveland to add a pitcher to its staff who was one of the best in the NL two years ago.

Sutcliffe was a 17-game winner for the Dodgers during his rookie season but slumped badly the previous two years. This past season he managed only a 2-2 record with a 4.02 ERA in 14 games.

Manager Tom Lasorda was so disappointed in Sutcliffe's performance this year that he did not add the right-hander to his post-season playoff roster. That angered Sutcliffe so much that he tore up Lasorda's office in a fit of anger and subsequently asked to be traded.

'My run-in with Sutcliffe has nothing to do with his ability,' said Lasorda. 'He slumped a bit the last two years but I've always said he was one of the best competitors that ever played for me. He has good ability and has a chance to be a good pitcher.'

Orta, 31, gives the Dodgers a strong bat as well as a player with versatility. A lifetime .282 hitter, Orta can play the outfield and second base and the Dodgers have always liked players who can fill in at different positions.

'We have always liked Jorge Orta,' said Dodger vice president Al Campanis. 'He is a pure and natural hitter who can play the infield and the outfield. We had tried to obtain his services in the past from the Chicago White Sox.'

White, a 23-year-old right-hander, pitched for Chattanooga in the Southern League last season and compiled a 10-12 record with a 3.51 ERA. Fimple, 22, was the Midwest League All-Star catcher at Waterloo, Iowa, and had his finest season as he hit .288 with 10 homers and 76 RBI.

Perconte, 27, has been on the verge of making it in the big leagues but hasn't gotten the chance with Los Angeles because of its veteran infield. He hit .346 for Albuquerque in 127 games last season but has hit only .231 in 22 major league games.

In Herndon, the Tigers are receiving a 31-year-old speedster with a .267 lifetime batting average and are giving up a pitcher who was a disappointment to them since being acquired from Montreal for Ron LeFlore in 1979. Schatzeder, 27, was only 6-8 with a 6.08 ERA last year after winning 19 games for Montreal in 1978. Chris was assigned to the Giants' Phoenix triple A farm club in the Pacific Coast League.

By letting Meyer go, the Mariners have broken their last player link to their expansion season of 1977. Meyer, 29, batted .262 last season and is the club's all-time leader in several offensive departments. Bordi, 22, pitched at Tacoma of the Pacific Coast League last season. 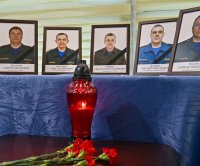 World News // 2 hours ago
Russian authorities arrest 5 in connection with deadly coal mine disaster
Nov. 27 (UPI) -- Authorities have arrested five people on charges related to negligence in a Russian coal mine disaster that left more than 50 people dead.