TORONTO -- Veteran Toronto broadcaster Gordon Sinclair, 81, famous in the United States for his record extolling the virtues of America, was in hospital today listed in serious condition with a heart ailment.

The broadcaster has delivered a commentary on radio station CFRB for many years called 'Let's Be Personal.'

In one of those broadcasts, aired June 5, 1973 he called Americans 'the most generous and least appreciated people in all the earth.' A record titled 'The Americans' was made of the commentary.

'The Americans' was played on radio stations in the United States just after U.S. troops were withdrawn from Vietnam and during the time of the U.S. Senate hearings into the Watergate political scandal.

Sinclair received large quantities of appreciative mail from people all over the United States.

President Reagan asked to meet Sinclair in Ottawa during his state visit to Canada in March. The pair were introduced by Prime Minister Pierre Trudeau at a state dinner, at which Reagan thanked Sinclair for the commentary.

Sinclair was admitted to Queensway General Hospital Saturday and was placed in the hospital's intensive care unit. A hospital spokeswoman said his condition though serious was stable. He was visited by his family. 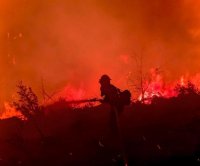 World News // 10 hours ago
Japan's COVID-19 deaths drop 5% amid state of emergency during Games
July 25 (UPI) -- Japan is staging the Summer Olympics during a state of emergency and without spectators with coronavirus cases surging though the situation nowhere nearly as dire elsewhere.

U.S. News // 10 hours ago
Locally severe storms to precede hotter air in northeastern US as weekend finishes up
July 25 (UPI) -- AccuWeather meteorologists caution travelers and those with outdoor plans in the northeastern United States into Sunday evening as locally robust storms will cross the region ahead of slight drop in humidity levels.