Ana Maria Carrasco of Venezuela shattered her own world...

SANTA CLARA, Calif. -- Ana Maria Carrasco of Venezuela shattered her own world record in water skiing tricks by 100 points and Switzerland ran off six straight victories without losing a point to win the gold medal in light heavyweight tug of war Saturday at World Games I.

Carrasco, who has a pending world mark of 6,870 points, led four qualifiers into the tricks semifinals by scoring 6,970. The listed world record of 6,580 points is held by the Soviet Union's Natalia Rumjantesva. Russia is not competing in the World Games and in fact worked hard to prevent the competition in 16 non-Olympic sports from ever becoming a reality.

But about 1,400 athletes from 58 countries, including the Republic of China and Poland, are here and for the second straight day the competition was well received. Friday night, a crowd of more than 8,000 turned out for the opening ceremonies and saw England, the 1980 world champion, win the Games' first gold medal -- in 640 kilo (1,410 pounds) tug of war by edging Switzerland, 15 points to 14.

Saturday, though, the Swiss 720 kilo (1,587 pounds) team shut out six opponents (including England in two pulls that took only four minutes) to win a maximum 18 points. The Netherlands won the silver with 15 points and England salvaged the bronze with 12. Once again, the United States finished last in a field of seven.

Four gold medals were awarded in fin swimming, the only sport the United States passed up, and two of them went to Italians.

In the men's water skiing competition, Patrice Martin of France, the current world champion, paced qualifiers in the tricks by scoring 8,090 points, while Sammy Duvall of the United States led qualifiers in the jump, edging world record holder Mike Hazelwood of Great Britain by a foot.

In karate, Japan had five winners in the 60 and 65 kilo classes, while in kata (women's karate), Japan qualified two of the three semifinalists (desk, three is correct).

In badminton men's singles, England and Indonesia each advanced two players into the second round, while in women's singles, which progressed through two rounds, Korea had two winners while Taipei and the Republic of China had one each. The United States was shut out in both divisions. 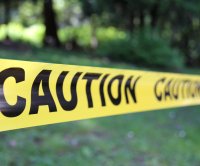 Science News // 39 minutes ago
Astronomers find evidence of possible life-sustaining planet
Aug. 5 (UPI) -- Astronomers have found signs of a planet that may have a life-supporting atmosphere, according to a study published Thursday.

U.S. News // 57 minutes ago
Spirit Airlines cancels half of all flights amid ongoing system, staff troubles
Aug. 5 (UPI) -- For the fifth day in a row, Spirit Airlines on Thursday canceled hundreds of flights due to a variety of problems facing the budget carrier.

Health News // 2 hours ago
Most in rural areas 'comfortable' with telehealth during pandemic, study finds
Aug. 5 (UPI) -- Nearly 80% of people living in rural areas who relied on telehealth to continue medical consultations during the COVID-19 pandemic were comfortable connecting with providers remotely, a JAMA Network Open study found.