'Whispering' Bill Anderson, who became the first country music star to appear in a soap opera last year when he debuted on 'One Life to Live,' soon will be leading two lives.

ABC has signed the Grand Ole Opry star as a featured regular on the series. 'One Life to Live' has about 7 million regular followers. Jackie Smith, vice president of ABC's daytime programing, thinks featuring a country music star on a daytime series is a first. 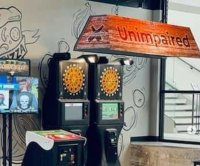