"I screwed up, man, I screwed up," a neighbor quoted Pryor as screaming as he ran from his posh home in an apparent panic of pain.

Arson investigators said they found no evidence of drugs or flammable liquid in Pryor's home but they did not search the house until more than 12 hours after the Monday night explosion that scorched a wall, the ceiling and floor of his bedroom.

Police said Pryor had told the doctors treating him that he had been "freebasing," a new craze among cocaine snorters, and that the material exploded in his face and engulfed his body in flames.

An aunt smothered the blaze with sheets and Pryor then ran out of the house screaming in pain.

Freebase is a mixture of cocaine and some type of flammable liquid, usually ether, which is burned to purify the cocaine. Pryor has publicly admitted in the past he has used cocaine.

Pryor suffered first, second and third degree bums over 50 percent of his body and was listed in critical but stable condition at the Sherman Oaks Community Hospital burn ward.

Doctors said victims in Pryor's age group who suffer such burns have a survival rate of just 25 to 35 percent. But he was reported responding to whirpool treatments to remove charred skin and flesh late Tuesday.

Police spokesman Lt. Dan Cooke did not disclose the exact circumstances of the explosion but officers emerging from Pryor's home said as far as they were concerned, "the case is closed."

Authorities discounted earlier reports that the explosion was caused by a cigarette lighter.

Fire Dept. Captain Terry Dickeson said arson investigators have not been yet able to talk with Pryor.

He was visited Tuesday by several friends arid relatives including actors Jim Brown and Dan Haggerty, who suffered severe facial burns a year ago.

Both Cooke and Dickeson said an unidentified aunt of Pryor was in the home at the time of the explosion and threw a sheet over Pryor, extinguishing the flames. But the comedian threw off the sheet and rushed out of the home in "obvious great pain," running for a mile before he was found by two police officers.

Pryor continued to walk for two blocks, then began jogging with Zielinksi at his side. "I did not want to touch him for fear of injuring him," the officer said.

An ambulance finally arrived after the pair had jogged for half a mile, Zielinksi said.

The team of doctors treating him included heart and respiratory specialists, Swaye said.

Pryor was extensively burned from his waist up including his face. He was heavily wrapped in gauze and doctors said as soon as his condition allowed, he would be placed in a respiratory tube similar to a pressure chamber.

The purpose of the tube is to pump up a patient's blood pressure and expedite recovery, the hospital said.

Pryor was being attended by a team of doctors led by Dr. Jack Grossman and his brother, Richard.

He was able to talk but so far had not been able to give officers any information about what caused the fire, doctors said.

The Sherman Oaks Hospital burn ward is a 30-bed specialized facility. In addition to Pryor, there were 23 other patients in the ward Tuesday.

Dr. Grossman earlier described the burns as "very serious" and said skin grafting was usually employed in such cases.

The doctor said statistics showed that burn victims in Pryor's age range usually survived with their lives in only 25 to 35 percent of the cases.

We understand Pryor's aunt was with him at the time and wrapped a bedsheet around him to kill the flames. "But Pryor must have panicked. He ran from the house and was running down the street when he was stopped by policemen in a patrol car."

Pryor was taken to the hospital in shock. He was visited later Monday night by members of his family.

A star of motion pictures, television, nightclubs and recordings, Pryor had completed two films earlier this year, "Wholly Moses," due out this month, and "Stir Crazy." He had starring roles in such movies as "Silver Streak," "The Wiz," "Greased Lightning," "Car Wash" and "Uptown Saturday Night."

Pryor, who reportedly lived alone, was divorced from his third wife, Deborah Denise, in 1978 following an altercation in which he allegedly fired shots and rammed an automobile in which two of his wife's friends were sitting.

He pleaded no contest to charges of misdemeanor assault and was fined $500 and ordered to seek psychiatric care.

The comedian served a 10-day jail sentence in 1974 after pleading guilty to failing to file a federal income tax return.

Pryor was admitted to his hometown hospital in Peoria, HI., two years ago suffering chest pains.

Pryor won Grammys for three of his comedy records.

He coauthored the movie "Blazing Saddles" with Mel Brooks and wrote scripts for television's "Sanford and Son" and "The Flip Wilson Show."

Top News // 4 minutes ago
UPI Almanac for Thursday, Sept. 23, 2021
On Sept. 23, 1950, the U.S. Congress adopted the Internal Security Act, which provided for the registration of communists. 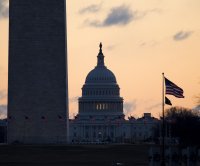 Top News // 4 minutes ago
On This Day: Congress requires communists to register
Sept. 23 (UPI) -- On Sept. 23, 1950, the U.S. Congress adopted the Internal Security Act, which provided for the registration of communists.

World News // 7 hours ago
Heaviest rainfall in more than a decade floods major city in India
Sept. 22 (UPI) -- Streets and homes were inundated with floodwaters and transportation ground to a halt on Monday when the Indian city of Kolkata received more than 50% of its normal rainfall for the entire month.
Advertisement