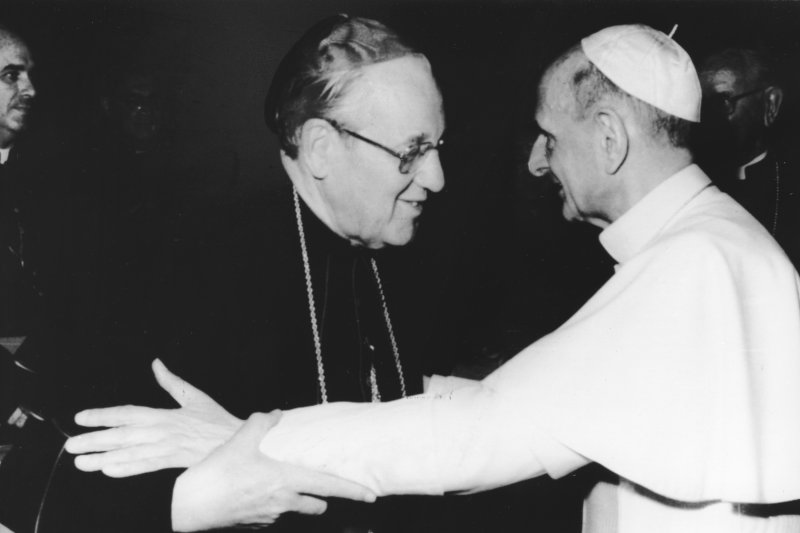 VATICAN CITY (UPI) -- Pope Paul VI, who led the world's 700 million Roman Catholics for 15 turbulent years of controversy and reform, died at his summer palace Sunday night. He was 80.

As the faithful knelt in prayer for Paul's soul today, intense speculation immediately arose over who will succeed him on the Throne of St. Peter. Observers said the reign of the next pope be a fateful time for the church.

Efforts for religious unity and world peace were the twin themes of Paul's papacy. The first pope to leave Italy in nearly 200 years, he tirelessly pursued his goals in pilgrimages to six continents.

The church came dangerously close to schism during Paul's years, however, and his attempts to end hostilities in the Holy Land and other world trouble spots met with scant success.

As preparations began for Paul's burial in a crypt under St. Peter's Basilica, members of the College of Cardinals -- the most varied group of cardinals ever, because of reforms effected by the late pope -- gathered to elect his successor. Vatican sources said the new pontiff is almost certain to be Italian, like all of his predecessors for the past 450 years.

The pope's death came at 9:40 p.m. (2:40 p.m. CDT) Sunday, three hours and 10 minutes after he suffered a heart attack while listening to a mass in the private chambers of his Castle Gandolfo summer palace, in the mountains 15 miles south of Rome.

Doctors were administering oxygen to the pontiff in a futile attempt to keep him breathing when he died, Vatican officials said.

The pope's personal doctors today said his final illness began last week with an acute attack of arthritis, the painful leg ailment that had troubled him for years. The arthritis was complicated on Saturday by a bladder inflammation.

By Sunday, Drs. Mario Fontana and Renato Buzzonetti said, the pontiff's lungs had begun to fill with fluid, and the combination of ailments was too much for his heart to overcome.

As news of the Paul's death flashed across Italy, thousands crowded into St. Peter's Square and into churches throughout the country to attend requiem masses.

Cardinals around the world headed for Rome to take part in the conclave to elect a new pontiff. Vatican officials said the meeting would open between Aug. 21 and 26.

"With profound anguish and emotion we have to inform you that the pope died at 9:40 p.m. tonight, Sunday, Aug. 6, at the papal summer palace of Castle Gandolfo," Pastore said in a choking voice.

Odd News // 4 hours ago
'Wordle' tops Google's most searched list for 2022
Dec. 7 (UPI) -- Google's annual Year in Search list is a microcosm of all that collectively grabbed people's attention throughout the year and in 2022 the game Wordle was No. 1.

U.S. News // 5 hours ago
More than two-thirds of shoppers struggling to pay for groceries
Dec. 7 (UPI) -- Grocery bills are too expensive for the average American and customers are changing their shopping habits, according to a survey released Wednesday.
Advertisement