A death sentence over coffee

SAIGON, April 29, 1975 (UPI) -- The death sentence was passed on the young couple's hopes over breakfast coffee in the quiet garden of Saigon's Continental Hotel.

The reporter had just smeared his warm croissant with jam when the two embarrassed Vietnamese presented their letter.

She was of travel poster beauty; he, in his mid-30s, wiry and wearing a neat white shirt and black slacks.

The letter identified them as relatives of a Vietnamese abroad. It asked the reporter's help in getting them an entry visa to his country.

They had come to a foreigner, a stranger, as a "court of last appeal."

No matter how softly the reporter spoke or how diplomatically he attempted to dull the word's meaning, the decision would be "appeal denied."

He asked the girl why she wanted to leave.

The man, a doctor, translated into groping English her explanation that her relatives had been executed in Hue in the 1968 Tet offensive. They were mandarins, and she was certain her entire family was on the list of those to be executed if Saigon fell.

The doctor said he had worked for the Americans and knew there was no way of keeping his "traitorous" past hidden.

There were families involved, her parents, and the doctor's two children.

Then it became clear. The words were never spoken, but what the girl was offering the reporter was herself.

No mention was made of the small wedding ring on the girl's finger. How stupid of them not to have left it at home, for it glaringly disclosed their clumsy plot.

They were not just friends. They were husband and wife. Perhaps the letter was even fake.

They had heard that foreigners, enticed by the possibility of possessing a beautiful Vietnamese girl, might arrange to get her out of the country.

With her husband's approval, she was offering herself to save her family.

By no word or question did the reporter disclose his awareness of the plot. There was no way he could help.

He explained the two would need exit visas from their government. Without such papers, no Vietnamese was allowed to leave Saigon and no entry visa to the reporter's country could be given.

He suggested they obtain the clearance from Vietnamese immigration and then return and he would try.

The reporter never knew if they, too, were aware of the grisly fact that visas were being given only those able to pay into greedy palms hundreds of U.S. dollars-sums only lottery winners could pay.

They nodded solemnly. With murmured apologies for disturbing his breakfast, they slowly walked out of the garden and the reporter's life.

Health News // 19 minutes ago
In 16 states, more than one-third of residents is now obese, CDC reports
This week, the U.S. Centers for Disease Control and Prevention announced that 16 states now have at least 35% of their residents who are obese, a number that's nearly doubled since 2018. 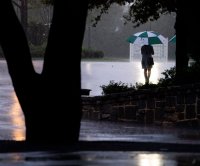 Health News // 8 hours ago
NIH to spend $70M for long-haul COVID-19 study at dozens of institutions
The U.S. National Institutes of Health is spending nearly $470 million to study the long-term effects of COVID-19, the agency announced.

Health News // 8 hours ago
PFAS 'forever chemicals' may affect ability to breastfeed, study finds
Sept. 16 (UPI) -- Women with higher levels of PFAS in their blood may be more likely to stop breastfeeding early, a new study published Thursday by the Journal of Clinical Endocrinology & Metabolism found.