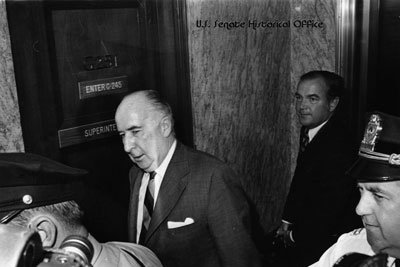 WASHINGTON (UPI) -- Former Attorney General John N. Mitchell said Sunday it was "ridiculous" for anybody to take seriously his wife Martha's suggestion that President Nixon resign because of the Watergate scandal.

Mitchell, in a statement Issued through Nixon's reelection campaign committee here, also chided United Press International and one of its White House correspondents, Helen Thomas, for reporting comments Mrs. Mitchell made about the President in a telephone call Saturday night to Miss Thomas.

During the conversation, which Mrs. Mitchell initiated from her New York apartment and urged Miss Thomas to report quickly, she said: "Mr. President should resign immediately. I think he let the country down. It's going to take a hell of a lot to get him ... He's been compromised."

Mitchell, who has been mentioned frequently in allegations of an effort to cover up high-level administration involvement in the bugging of Democratic offices at the Watergate building, issued this statement:

"Martha's late night telephone calls have been good fun and games in the past. However, this is a serious issue. I'm surprised and disappointed that United Press International would take advantage of a personal phone call made under the stress of the current situation and treat it as a sensational public statement.

"I think that under all the circumstances, Martha is entitled to more consideration and courtesy than that, particularly from a reporter whom she had considered a personal friend.

"Any thought of the President resigning is ridiculous."

As she has in previous phone calls to UPI about Watergate, Mrs. Mitchell made clear she was speaking for quotation and was not calling on a personal basis. As far as was known, it was the first time her husband had volunteered a comment on one of her statements.

Mrs. Mitchell also has spoken to the Associated Press and The New York Times about Watergate in recent weeks, but none of her statements was as blunt as her suggestion that the President should resign.

Health News // 2 hours ago
Advanced cervical cancer cases rise in the U.S.
While rates of early stage cervical cancer have been dropping in the United States ever since the human papillomavirus (HPV) vaccine was introduced, advanced cases have been on the rise, new research shows.

World News // 2 hours ago
ISIS 'Beatle' sentenced to life in prison
Aug. 19 (UPI) -- A British man accused of operating an ISIS hostage-taking scheme that led to the deaths of four Americans, was sentenced Friday to eight life sentences.

Odd News // 2 hours ago
Trapped puppy rescued from muddy sinkhole in Texas
Aug. 19 (UPI) -- Animal rescuers in Texas said they came to the assistance of a puppy found buried up to its chest in mud in a sink hole.

Odd News // 2 hours ago
Michigan man thought $751,265 lottery jackpot was a computer glitch
Aug. 19 (UPI) -- A Michigan man said he thought there was something wrong with his lottery account when he logged in and saw a $751,265 prize from a Fantasy 5 drawing.