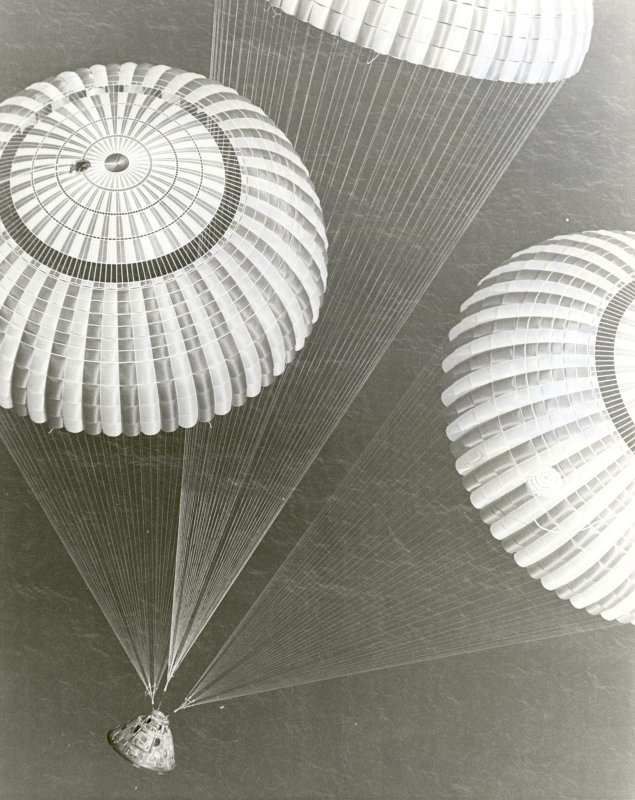 ABOARD USS TICONDEROGA -- Apollo 17's triumphant moon explorers landed on target in the South Pacific today and reported they were in great shape. It was a flawless conclusion to an era in which man conquered the moon.

The heat-seared command module America was lowered into the gentle blue seas by three orange and white parachutes at 11:25 a.m. PST in full view of television cameras aboard this recovery ship.

Eugene A. Cernan, Ronald E. Evans and Jack Schmitt brought to Earth the prize 258 pounds of moon samples they sought and a treasure of souvenirs marking the end of Project Apollo.

"The crew is go," shouted Cernan after the cone-shaped spacecraft plopped down almost directly below a helicopter carrying a television camera.

"This is America and the crew is doing fine," Cernan reported as the spacecraft bobbed slightly 10 minutes after splashdown. "We've all got our sea legs."

Recovery forces told the astronauts they landed 3.1 miles from the aircraft carrier.

"Okay," Cernan said. "I guess we'll have to argue with the captain whether we were on station or he was."

"You both were," replied the recovery forces.

Swimmers quickly jumped out of a hovering helicopter and inflated flotation gear around the gray spacecraft.

"Looks like a beautiful day for recovery," said Cernan, a Navy captain.

The aircraft carrier Ticonderoga stood by to retrieve the astronauts and start them on the way home to Houston Thursday to join their families and friends for the Christmas holidays.

The moon explorers slashed into upper fringes of earth's atmosphere traveling 6.8 miles a second and decelerated quickly to a gentle parachute landing in just 13 minutes. It may be decades before men fly that fast again.

"Alll is well on board," reported Cernan just before splashdown. "It's a beautiful day."

The bullseye landing was a fitting finale to the last Apollo moonlight.

"America is stable one," exclaimed Cernan after the spacecraft hit the water. That meant the capsule did not overturn as many previous Apollos have.

"The crew is go," Cernan said.

SPACE CENTER, Houston -- These are the records set by Apollo 17 during man's sixth and final moon landing mission:

Time exploring the surface: 22 hours, 5 minutes, surpassing the record of 20 hours, 16 minutes set by Young and Duke on Apollo 16. The total for all Apollo astronauts: 3 days, 7 hours, 54 minutes.

Amount of rocks and soil collected: Estimated 249.5 pounds, breaking record of 208 pounds of Apollo 16. Total rocks collected by all missions: about 832.5 pounds.

Moon surface speed record: 11.1 miles per hour by Cernan in Rover III, breaking that of 10.5 mph by Young in Rover II on Apollo 16.