SALISBURY, Rhodesia -- An underground explosion at the Wankie coal mine near Victoria Falls trapped 468 miners today and the death toll was feared to be high.

Hospital sources reported that some of the miners had managed to escape from one of the several entrances to the No. 2 colliery where the blast occurred at 10 a.m. (4 a.m. eat).

A spokesman for the mine owners, Anglo-American Corp., said that there was "no further news" on the fate of the miners -- 435 black Africans and 33 whites -- working a full shift in the mine when the blast occurred.

A spokesman for the Wankie colliery company also said it had no reports on deaths but mine sources said they believed the toll would be high.

Wankie is 350 miles west of Salisbury. It is Rhodesia's major coal supplier and adjoins the Wankie game reserve near the Victoria Falls.

Health News // 3 hours ago
Stem cell treatment may prevent amputations in diabetes
One of the most dangerous complications of diabetes is a foot ulcer that won't heal, but now a preliminary study finds that a type of stem cell found in body fat may be a powerful remedy for these severe foot wounds.

Health News // 5 hours ago
Woman's DDT exposure may affect granddaughter's health, study says
A long-banned pesticide may be having health effects that ripple across generations, a new study suggests.

U.S. News // 5 hours ago
China is working to undo global norms in its favor, says U.S. intelligence community
April 14 (UPI) -- U.S. intelligence officials briefed the Senate on challenges the United States faces in protecting the homeland, including the increasing competition from China. 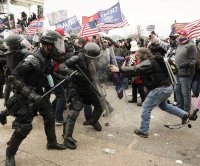 U.S. News // 9 hours ago
Capitol rioter accused of beating officer to be jailed until trial
April 14 (UPI) -- Jeffrey Sabol, a Colorado man accused of beating an officer who was treating injured rioters during the Jan. 6 insurrection at the Capitol, was ordered to remain in jail until his trial.

U.S. News // 10 hours ago
CDC: Empty middle seats on planes can reduce COVID-19 exposure by up to 57%
April 14 (UPI) -- The Centers for Disease Control and Prevention released a study Wednesday stating that leaving middle seats open on aircraft can reduce exposure to COVID-19 between 23% and 57%.

Capitol Police officer not charged in fatal shooting of rioter