SAIGON -- Four tank-led South Vietnamese task forces estimated at 9,000 men drove deep into Cambodia today with U.S. air support, and their commander announced they would remain "for many days" to trap and destroy thousands of Communist troops in their onetime sanctuary.

Three task forces estimated at 2,500 each drove into Cambodia in the Parrot's Beak sector which juts into South Vietnam to within 35 miles of Saigon. A fourth task force of 1,500 pushed across the border from the Mekong Delta town of Kieng Tuong to try to cut off 15,000 Viet Cong in the area.

So far the South Vietnamese report killing 445 Viet Cong and North Vietnamese troops and capturing vast supplies of equipment at a loss of 32 killed and 112 wounded, 55 of the wounded strafed by mistake by U. S. helicopter gunships. Two U. S. advisers were reported wounded.

Although a Cambodian spokesman in Phnom Penh said his government could not approve the Allied operation, since it violated Cambodian neutrality, front dispatches said" the operation was coordinated with/ the Cambodian army to the extent a dozen Cambodians linked up with Che advancing Vietnamese forces as guides.

The first officially acknowledged drive into Cambodia by South Vietnamese troops had the official purpose of destroying Viet Cong and North Vietnamese base camps neaY the bonier. fcuVas the Com- munis ts fled from the Allies -- some' in commandeered cars -- the scope of the action was extended.

Lt. Gen. Do Cao Tri, told UPI correspondent James B. Russell he was extending the operation because: "We will need many days to search the area thoroughly. We will try to control the area, to trap them inside and destroy them."

He said three brigades of South Vietnamese troops were involved in the push along Highway 1. Newly structured South Vietnamese brigades total about 80 per cent of an American Army brigade of 4,500 men, but military sources in Saigon said Tri's forces totaled about 7,500 men.

Russell said American advisers were visible along the route, handling radio communications and plotting map coordinates. There also were a number of Green Beret men with Cambodian mercenary groups which have been used against the Viet Cong near the Mekong Delta region for years.

At first, Russell said, Cambodian residents smiled and waved and posed grinning for photographs' as the South Vietnamese columns passed by without opposition.

As they drove deeper into Cambodia the friendly atmosphere began to vanish, he said. General Tri, however, remained in good spirits. Asked whether the Americans had given approval of the operation, he smiled and said, "I decided to do it and it was up to the government to make arrangements for the political side."

UPI correspondent Barney Seibert, traveling north of Highway 1 with an armored column, said Cambodian soldiers were serving as guides for the South Vietnamese troops. He said government rangers were using their radios to call on American eight-inch guns for artillery support. U. S. liaison officers also were directing air strikes. 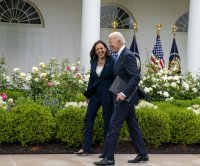