Aerial view of a crowd of rock fans, estimated at 300,000 to 500,000, gathered at Altamont Speedway for a rock concert by the Rolling Stones and other musical groups on December 6,1969. File photo by UPI

LIVERMORE, Calif. (UPI) -- A stabbing death Saturday climaxed a free concert attended by hundreds of thousands of young persons in perhaps the biggest musical bash of all time at Altamont Speedway just east of here.

Estimates of the crowd drawn to see the Rolling Stones and 20 other musical groups ranged upward from 300,000.

Dr. Richard Fine, in charge of a first aid station at the concert, said a young man was fatally stabbed. (Three births and a drowning were also reported.)

The youngsters swarmed onto the barren hills beside a motorcycle racetrack for the concert.

They came in sports cars, jalopies, mini-buses, camper trucks and on foot, creating a traffic jam that stalled cars as for as 20 miles away on the main four-lane highway from San Francisco.

The highway patrol said traffic leaving the area after the concert was "moving much better than coming in."

There were reports of several 'beatings by members of the Hell's Angels motorcycle gang both during and after the concert. Several of the youths spread bedrolls on the hillside after the event, apparently to spend the night, as many had Friday night.

There were hippies, students, teenie boppers and others defying description. But all were young and all were drawn by the magnetism of an hours-long burst of free rock music climaxed by an appearance of the Rolling Stones, Britain's rock band that has been making its first U.S. tour in several years.

Many were high on drugs and wine. Drug peddlers circulated freely, crying "Acid, Acid, Acid." A "Hell's Angels" gang bludgeoned its way right onto the stage. But most of the youths were good natured and well-behaved. Only scattered arrests were reported.

They huddled together on blankets as temperatures dropped into the 40s with the arrival of darkness.

Thousands had spent the night there awaiting the start of the concert. Many more thousands planned to sit it out until after dawn because of the crush of traffic in the concert area 50 miles southeast of San Francisco.

The throng at the Altamont Speedway, which usually draws a few thousand to motorcycle and jalopie races, may have surpassed the 300,000 who attended the chaotic Woodstock flock Festival in 'New York last August. The traffic jam caused by that gathering lasted for days.

A.A. C. Fox, head of the security service which provided the private police force for the concert grounds, estimated the crowd at 300,000, which would be close to half the population of San Francisco. Some guesses ranged higher.

When the bands played the crowd cheered, and couples danced if they could find the room. Balloons were released and flowers thrown into the air.

The size of the crowd was particularly spectacular because of the promoters troubles in finding a site, which finally was settled upon less than 24 hours before the concert began.

But the word got around fast. And so did the rock who were predominantly white and who came from as far away as Florida.

A handful of peddlers circulated through the crowd, calling "acid, acid...." and "speed, speed" -- the street names for LSD and amphetamines. Marijuana and mescaline were also sold openly.

A small cloud of marijuana smoke rose over the crowd and bottles of red wine dotted the hillside.

The Rolling Stones said the concert was "a Christmas and Hanukkah gift" and a "thank you" to American youngsters who jammed the British group's concerts on a cross country tour.

The concert was announced late Wednesday, but the actual site wasn't determined until Friday. Work crews aided by volunteers spent the night building the stage and 10 giant sound towers spread for 100 yards on each side of it. 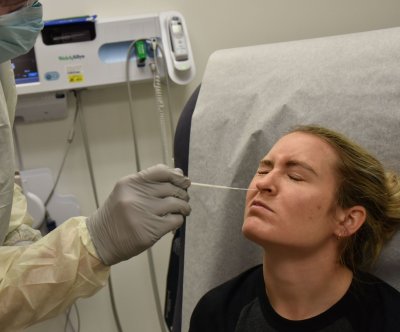 Health News // 5 hours ago
Testing shortages complicate decisions on COVID-19 recovery
April 8 (UPI) -- Shortages in testing kits for COVID-19 have not only led to confusion about who has the virus, but who has recovered from it, experts say.