WASHINGTON-American officials believe the death of North Vietnamese President Ho Chi Minh probably will have no substantial effect on Hanoi's war policy for the foreseeable future.

They expect his survivors among the leadership to continue much the same policies on the battlefield and at the peace table because all of them have been intimately engaged in implementing those policies for many years.

The consensus was that any significant change in Hanoi's attitude or actions could come only after enough time has passed to erode the powerful effect of his personality on the country and the Hanoi, politburo.

Even those few officials who at times had underestimated Ho in life had no inclination to downgrade the effect the legendary 79-year-old figure would have in death.

This did not mean, the U.S. intelligence analysts said, that there would not be a considerable power struggle in Hanoi among the top members of the Communist hierarchy. However, they expected this would be fought behind the scenes without affecting the general objectives for which "Uncle Ho" had pledged to fight a protracted struggle.

Some of the leading candidates are tabbed as pro- Moscow and others are described as leaning toward Peking. But all are fundamentally strong Vietnamese nationalists dedicated to Ho's objectives of unifying the country under the Lao Dang (Communist) party. Among those who might eventually take Ho's place, four are most prominently mentioned:

-Le Duan, Communist party secretary general, is considered a tough Communist who approves of Mao Tse-tung's rigid operations in China but, at the same time, leans ideologically toward Moscow. He is a southerner and therefore especially insistent on bringing South Vietnam under Communist rule in any settlement. But he has usually sided with moderate elements in Hanoi whenever it has been a question of choosing between Moscow and Peking.

-Truong Chinh, a 60-year-old veteran, is generally considered pro-Peking. It was he who carried out a brutal land reform program in 1956 which subsequently was criticized by other leaders for its "excesses." He lost his job as secretary general of the party, but has staged a comeback and is now chairman of the national assembly and a member of the politburo. He has been one of the most vocal advocates of carrying on the war until all Hanoi's maximum demands are met.

-Defense Minister Vo Nguyen Giap, who lost some "face" when the 1968 Tet offensive in South Vietnam failed to achieve its objectives, nevertheless remains in a very strong position. He is the outstanding spokesman for the strategy now being followed against the Americans. That strategy calls for undertaking only small scale hit-and-run attacks in an effort to minimize Communist losses while inflicting as many American casualties as possible to increase American public opinion pressure on President Nixon to pull out of the conflict.

U.S. officials acknowledge there is a considerable element of guesswork involved in trying to predict who will succeed Ho, since the revered father of Vietnamese Communism had never specifically indicated upon whom he wished his mantle to fall.

Some officials considered it possible that some form of collective interim leadership would take over, with a behind the scenes power struggle to see who emerged as No. 1. They did not, however, expect this internal power struggle to result in any early or significant change in Hanoi's basic policies.

Those who are considered among the most likely candidates to succeed Ho all appear to share his firm belief that North Vietnam must make certain of its victory in the South this time and not depend upon any negotiated settlement which leaves open the possibility of an independent government in Saigon. 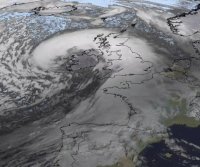 World News // 1 hour ago
Storm Barra crashes into Ireland, Britain with deadly force
The second named windstorm in less than two weeks reached bomb cyclone status prior to striking portions of Ireland and Britain with a fury Tuesday into Wednesday.

Science News // 5 hours ago
Russia strikes deal with NASA for first cosmonaut on SpaceX flight
Dec. 8 (UPI) -- Russia's only active female cosmonaut, Anna Kikina, will make her first trip to space in fall 2022 as the first Russian to fly on a SpaceX Crew Dragon capsule.

U.S. News // 5 hours ago
Woman's body pulled form car floating in Niagara River
Dec. 8 (UPI) -- A woman's body was pulled from the Niagara River in New York after her vehicle fell into the water on Wednesday.