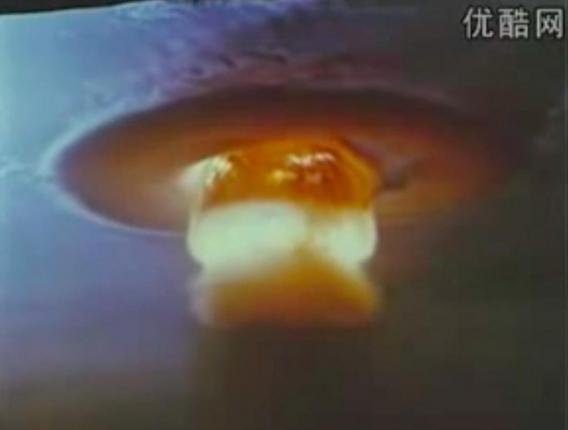 TOKYO, June 17, 1967 (UPI) - Communist China announced it successfully conducted its first hydrogen bomb test today in the air over the western part of the China mainland. The announcement was made in a Japanese language broadcast monitored in Tokyo. It said the Chinese scientists had succeeded in launching a "hydrogen bomb test."

It was the sixth Red Chinese nuclear weapons test since Peking joined the world atomic powers in October 1964, and the first of this year.

U.S. officials said today's blast was "no surprise if true" but said the United States had not confirmed the nature of the reported test.

The report of a successful test of a made-in-Peking hydrogen bomb would put China ahead of France in the nuclear arms race. France has been running tests on a hydrogen bomb test trigger in its South Pacific proving grounds and is not expected to test its first hydrogen device until the early 1970s.

The first Chinese nuclear device, exploded on Oct. 16, 1964, was about the size of the U.S. bomb dropped on Hiroshima during World War II-the equivalent of 20,000 tons of TNT.

A larger device was tested on May 14, 1965. The third test on May 6, 1966, contained "thermonuclear material," according to western monitors.

The fourth test look place on Oct. 27, 1966, and the Peking government claimed it employed a guided missile. The fifth text was conducted on Dec 28, 1966.

After the Dec. 28 test, the U.S. Atomic Energy Commission announced that the Chinese already were using some "thermal nuclear material."

This was taken to mean that the Dec. 26 device contained some hydrogen as well as uranium, but that it was experimental rather than a completed bomb.

Science News // 6 minutes ago
Humans have been bonding with cats for thousands of years
That special link you may have with a purring, four-legged friend has been going on between the species for millennia, new research shows.

Science News // 28 minutes ago
More Americans are moving to areas where wildfire risk is high
Some Americans appear to be moving from areas with frequent hurricanes and heat waves to places threatened by wildfire and rising heat.

U.S. News // 1 hour ago
Brittney Griner released from Russia in 1-for-1 exchange
Dec. 8 (UPI) -- President Joe Biden said Thursday morning that WNBA star and Olympian Brittney Griner has been released from a Russian prison in what appears to be a one-for-one prisoner exchange.

Health News // 2 hours ago
COVID-19 drug Paxlovid has been free; next year, sticker shock awaits
Dec. 8 (UPI) -- Nearly 6 million Americans have taken Paxlovid for free, courtesy of the federal government. But the government plans to stop footing the bill within months.

Odd News // 2 hours ago
Popular snowplow-naming contests drive home important message
As winter gets underway, some states are trying to bring some levity to the cold, dark season by holding a contest that raises awareness of snowplows across the country.

Science News // 2 hours ago
Thursday night will be best chance to see Mars in 2022
Mars will reach opposition on Thursday night, making it one of the best nights of 2022 to see the planet glow in the sky.
Advertisement

More than two-thirds of shoppers struggling to pay for groceries

Brittney Griner released from Russia in 1-for-1 exchange