Hiroshima as I saw it

Editor's Note: This article was the first story filed by a reporter on the ground in Hiroshima after the atomic bomb was dropped. A version of this article appeared in The New York Times on Aug. 31, 1945.

An unidentified newsman stands amid the rubble of Hiroshima in September 1945, a month after the atomic bomb was dropped on the city. The city had a population of roughly 400,000, three-quarters of them were civilians. (UPI/File) | License Photo

The devastation caused by the atomic bombing of Hiroshima, including the Fukuya department store that Leslie Nakashima mentions in his article, is captured in this undated file image. Photo by Henry, Leslie Nakashima's brother, via the Hiroshima Peace Media Center.

Leslie Nakashima, who went on to work as reporter for the United Press when the Tokyo bureau reopened, is shown sometime in the 1960s. Photo courtesy of Kazue Tokita, Leslie Nakashima's daughter via the Hiroshima Peace Media Center.

HIROSHIMA, Japan, Aug. 27 (UPI) -- That the atomic bomb, more than Russia's entry into the war, compelled Japan to surrender as she did on August 15 instead of waging a showdown battle on the Japanese mainland is a justifiable conclusion drawn after one sees what used to be Hiroshima city.

I've just returned to Tokyo from that city, which was destroyed at one stroke by a single atomic bomb thrown by a super flying fortress on the morning of August 6.

There's not a single building standing intact in the city -- until recently of 300,000 population. The death toll is expected to reach 100,000 with people continuing to die daily from burns suffered from the bomb's ultra-violet rays.

I arrived in Hiroshima at 0500 on August 22, to find out about my mother who lived in the outskirts of Hiroshima city.

Alighting from the train I found that Hiroshima Station, which was one of the largest in western Japan, had gone out of existence.

The only thing left was the concrete platforms. Fragmentary parts of the walls of the brick building that constituted the old section of the station also told of the severity of the destruction caused by the atomic bomb.

Getting out into the open I was dumbfounded with the destruction before me. The center of the city immediately to the south and west of the station had been razed to the ground and there was sweeping view to the foot of the mountains to the southeast and north of the city.

In other words, what had been a city of 300,000 population had vanished.

So far as I could see there were skeletons of only three concrete buildings still standing in the city's chief business center. They were the seven stories of a former department store, a five-story newspaper building (the former building of the Chugoku Shimbun), and a two-story bank.

Except for parts of brick gates and burnt out underground air raid shelters there remained no trace whatsoever of private dwellings.

I also found very little galvanized iron left, which was most significant inasmuch as every other Japanese city hit by fire bombs was found after the fires were out to be littered with so much galvanized iron as to give the impression that Japanese dwellings were mainly constructed from this material.

The sight before me as I headed for the outskirts of the city where my mother lived was virtually an unbelievable one.

It was unbelievable because only a fortnight before I had seen the city intact when I evacuated my wife and two daughters to central Japan.

Except for one or two bombs dropped on separate occasions by B-29s, Hiroshima city had not been subject to heavy incendiary bomb attacks although smaller cities in western Japan had been hit hard.

Kure, a naval station nearby, had been the target of a heavy fire bomb attack on several occasions and people in Hiroshima had been wondering why their city had not been attacked.

Here, however, as I trod my way through the debris wondering if my mother was still alive, I realized the reality that Hiroshima city had been destroyed through the stupendous destructive power of a single atomic bomb.

Two miles (3.2 km) from the city's center I found the dwellings heavily damaged?many of them crushed as if from heavily descending pressure.

Another half a mile (0.8 km) distant and I found walls of dwellings smashed in and roofs shattered to attest to the power of the bomb's air pressure.

Such was the condition of my mother's house but I found her safe. She said she was weeding grass in a relative's vegetable field about two miles (3.2 km) to the southeast of the city on the morning of August 6, when she saw the flash.

She immediately threw herself face down on the ground. She said she heard a terrific explosion and getting up, she saw columns of white smoke rising from all parts of the city high into the sky.

She said she then started running to her home as fast as she could because she didn't know what was coming next. Why she suffered no burns from the ultra violet rays of the bombs is amazing.

Mrs. Hatsunobu Watai, who formerly lived in Honolulu, said she's alive today because of her bad leg. Together with neighbor she left her home in the city's outskirts about 0800 to go to the dentist.

Because of the bad leg, she fell behind her neighbor. About 0815 when she was about two miles from the city's center she said she saw a bright flash in the sky, and immediately threw herself behind the rice standing in a paddy. And thus she avoided being burned by the bomb's rays.

The next moment, however, she heard a loud explosion and saw white columns of smoke shooting up into the sky. It was "living hell" she said and she fled and sought shelter in some vegetable fields.

The neighbor who had gone ahead, however, suffered severe burns in her face and body and died. Mrs. Watai's husband, also formerly of Honolulu, was at Hiroshima railway station at the time of the atomic bomb, but miraculously escaped with his life.

Watai said when he saw the flash overhead he threw himself face downward on the ground and remembered many people walking over him.

He then ran into the station building but the building began to crumble and he rushed out in time to save his life.

Miraculously he suffered no burns but he became sick from inhalation of the bomb's gas, for which he is still taking treatment.

A school in the suburbs near my mother's home has been turned into a field hospital to care for the people who suffered burns. But the majority of the cases are held to be hopeless. Many of them are unidentifiable. Even at this hospital, two or three patients are dying daily.

Even in this locality some three miles (4.8 km) from the city the leaves of vegetable plants have been scorched, causing the fear that the plant may eventually die.

Two weeks after the atomic bomb was dropped I still found the devastated city to be deserted. No attempt has been made to restore the streetcar transportation system.

And no attempt has been made to rehabilitate the city in any way. Warnings that people would take sick from the effects of uranium, which had seeped into the ground, kept people away from the destroyed area.

In this connection it has been reported that a number of soldiers doing salvage work have fallen ill, and therefore such work has been discontinued.

From such developments a fear has risen among Japanese authorities that reports from American sources that such bombed areas will be impossible for human habitation for 75 years may well be true.

I walked through the devastated area for two hours, looking for the ruins of the home of a friend on August 22 and then waited at Hiroshima Station for three hours on August 23 for the Tokyo bound train.

During this interval it is likely that I inhaled uranium because I'm still troubled with a loss of appetite and the least little exertion finds me tired.

The death toll was particularly heavy, I was told, because the governor of Hiroshima prefecture had issued a call for people on labor service to come out that day to haul away the lumber of buildings torn down to make fire escape routes in case of air raids.

Thousands of middle school boys and girls were accordingly victims and the number of those missing is astounding.

The Japanese authorities at first tried to minimize the effects of the atomic bomb but since the unconditional surrender they have been releasing full details.

Health News // 1 hour ago
Study: Farming practices, changing diets causing more in U.S. to be anemic
Growing numbers of Americans aren't getting enough iron in their diets most likely due to changes in farming practices and a shift away from red meat, researchers report.

U.S. News // 4 hours ago
Judge says Capitol rioters not 'political prisoners' in sentencing of Michigan man
Aug. 4 (UPI) -- Judge Amy Berman Jackson sentenced Karl Dresch, 41, to six months in prison after he pleaded guilty to entering the Capitol building during the Jan. 6 riot, saying he and other defendants are not "political prisoners."

U.S. News // 6 hours ago
Drone captures startling footage as Lake Oroville reduced to trickle
Lake Oroville, California's second-largest reservoir, looks like a shell of its typical self as the drought across the western United States continues to toast the region. 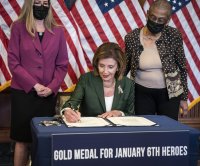