FLEMINGTON, N.J., Feb. 13, 1935 (UP) - Bruno Richard Hauptmann was convicted tonight of America's most colossal crime, and he must forfeit his life in the electric chair for his murder of baby Charles A. Lindbergh, Jr.

Hauptmann was immediately sentenced to die during the week of March 18.

Edward J. Reilly, chief defense counsel, announced immediately he will appeal "to the highest court in the land."

A jury that had searched for a verdict since 11:15 a.m. filed into the courtroom at 10:44 p.m. tonight and returned a verdict of "guilty as charged in the indictment."

That verdict solved for all time, so far as the State of New Jersey is concerned, the riddle of the Lindbergh crime. For the indictment charges that Hauptmann alone planned and executed the kidnaping that occurred almost three years ago on the slope of Sourland Mountain, and that nowhere are there any accomplices.

The courtroom was electric with tension as the jury, led by its scholarly foreman, Charles Walton, filed into the box. Hauptmann was sitting in the same seat he has occupied since the trial started, handcuffed to his guards.

Col. Charles A. Lindbergh, who has attended every session of the trial, was absent tonight.

Lloyd Fell, the court clerk, stood up at his table in front of the bench and asked:

"Jurors, have you reached a verdict?"

"We have," said Walton, holding a slip of paper in his hand.

"How say ye, guilty or not guilty?"

Dead silence spread through the room and then Walton's voice cut above it, clear and loud.

"We find the defendant, Bruno Richard Hauptmann, guilty of murder in the first degree."

Hauptmann had been ordered by the court to stand up while the jury incurred its verdict.

Not a muscle in the prisoner's body quivered as he heard the words that doomed him. Color crept up his neck and into his cheeks until his face was a flaming red.

These seats away set his wife, her face chalky white, while her eyes stared away into nothing.

Atty. Gen. Wilentz moved toward the judge's bench and said:

"It is the duty of the court to impose the sentence of death on this defendant within the week beginning March 18, 1935."

It was all over in ten minutes.

Hauptmann was about to be led back to his cell when he leaned over and spoke to Lloyd Fisher, the member of his legal staff who has visited him every day in jail.

"Can you come in tonight?" he asked Fisher.

"No, but I'll come in tomorrow," Fisher said.

Then Hauptmann was led out, around the corner of the bench, out a rear door and across the "bridge of sighs" to the cell that has been his home for months.

The prisoner stumbled a bit as he passed his counsel table.

"You know," Fisher said, as if talking to himself, "I never thought they would do that. The least they should have done was to give him life imprisonment and a chance to solve the crime that isn't solved yet."

After a conference at the defense table, Reilly announced he will appeal.

"Although the jury has rendered a verdict, on the facts," Reilly said, "we believe there were many errors of law which ultimately will mean a reversal."

Justice Trenchard turned to the jury that has heard 1,500,000 words of testimony and congratulated its members on the "faithful and conscientious execution of your duty."

Then guards surrounded Mrs. Hauptmann and escorted her to a rear door of the Courthouse. Her knees wavered a bit, and a State trooper took her arm and said:

Hurried interviews with persons close to the jurors indicated that the eight men and four women were agreed from the beginning of their deliberations today that Hauptmann was guilty. The only question that kept them in session for more than eleven hours was whether they should doom Hauptmann to the electric chair or bring in a recommendation of life imprisonment.

Despite the fact that Hauptmann was sentenced to be executed in the "week beginning March 18," it is extremely unlikely that he will die until May at the earliest. An appeal from a death penalty virtually is mandatory in New Jersey. That appeal probably will go to the Court of Errors and Appeals. That is made up of he nine Supreme Court justices, six lay judges and the chancellor of New Jersey.

Sheriff John H. Curtis said tonight he is undecided when Hauptmann will be moved from the Hunterdon County Jail to the death house at Trenton. The law stipulates that forty-eight hours must elapse between the time of sentencing and the removal to the State prison.

Justice Trenchard signed the death warrant while still on the bench tonight.

A throng surged outside the Courthouse tonight when the old bell in the tower of Hunterdon county Courthouse began to toll the ancient signal that the jury was ready to file in.

While the crowded courtroom was waiting for the jury to come in, the lights in the old Courthouse suddenly blinked and went out.

For five minutes there was confusion with women shrieking. Then the lights came on again.

It was 11:15 a.m. when Justice Trenchard finished his charge and ordered the jury to retire from the courtroom and seek the answer to the greatest riddle of crime of he day and age.

Fifteen minutes later Col. Lindbergh strode out of the court. He never returned to hear the verdict.

Lindbergh, who has not missed a day in court since the trial started, believes he has served justice to the fullest ability. He testified against Hauptmann and expressed the belief from the witness chair that he was guilty.

Hauptmann's lawyers obviously were disappointed in the charge to the jury. For as soon as Justice Trenchard concluded and the jury had been sent out, they went to the bench and filed a lengthy list of objections. The purpose of them was to have the court recall the jury and revise the charge.

Trenchard refused to do that, but he granted exceptions to defense counsel, which they can use in event they have to file an appeal.

The court began the charge by pointing out there were three possible verdicts:

Guilty as charged in the indictment, which means that Hauptmann would have to die in the electric chair.

Guilty with a recommendation of life imprisonment.

Defense counsel were particularly distressed because Justice Trenchard made no reference by name to any of their witnesses except Hauptmann. Concerning Hauptmann's appearance on the witness stand, the court said:

"The defendant's own evidence is not to be rejected because of his interest in the case, but it may be considered by you whether he is telling the truth. It appears, on examination in court, that the defendant has before been convicted, and you may consider that solely to question its credibility."

None of the defense witnesses fared well at the hands of Justice Trenchard.

State's witnesses, on the other hand, were mentioned freely throughout the charge to the jury. The court referred to Col. Lindbergh's identification of Hauptmann's voice and to the testimony given by Betty Gow and Mrs. Ollie Whately, widow of the Lindbergh butler.

But it was to two old men that the court threw its weight and prestige strongest.

One of them was the old man who conducted the ransom negotiations - Dr. John F. Condon, who took the name of "Jafsie" in his attempt to bring about the return of the Lindbergh child.

Science News // 1 hour ago
Watch live: SpaceX launch would boost Starlink network to 480 satellites
ORLANDO, Fla., June 3 (UPI) -- The planned launch of 60 SpaceX satellites in Florida on Wednesday night will bring the number of Starlink spacecraft in orbit to 480, eclipsing by far any previous networks of communication satellites.

U.S. News // 3 hours ago
Stacey Abrams advocates for vote-by-mail ahead of presidential election
COVID-19 has killed more than 100,000 Americans, but some elected officials still oppose voting by mail in November. Activists pushed back against this position at a congressional hearing Wednesday.

Science News // 3 hours ago
Ancient burial site in Belize reveals when people started eating maize
June 3 (UPI) -- Maize is a staple crop across much of the Americas, and new research suggests it's been that way for at least 4,700 years.

Odd News // 4 hours ago
Bystanders use CPR to revive baby deer found drowning in lake
June 3 (UPI) -- A pair of bystanders rescued a baby deer spotted drowning in a lake and used CPR techniques to revive the fawn. 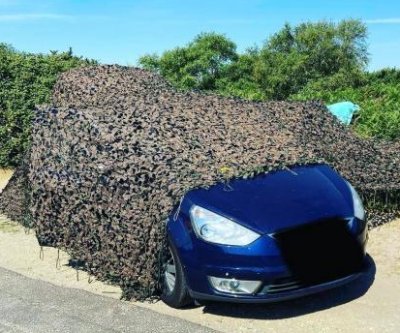