Portrait of Ms. Jeanette Rankin of Montana, in 1916 she became the first woman elected to the United States Congress. File Photo by Library of Congress/UPI

WASHINGTON, April 2, 1917 (UP) -- One of the most picturesque demonstrations ever witnessed in the historic House chamber was staged to-day when the first woman ever to sit there as a member took the oath of office.

Men and women in the galleries pounded hands together and yelled themselves hoarse; members did the same on both sides of the chamber when Miss Jeanette Rankin, "the lady from Montana," entered the hall. She had previously been accorded an entirely impromptu but hearty welcome in the Speaker's room which had been put at her disposal for the moment.

Speaker Clark personally escorted her to a seat on the Republican side about in the center.

Almost immediately she was surrounded and completely lost to view. Everyone wanted to shake her hand and almost everyone on the floor did, until the rap of the gavel called members to their seats.

A suffrage breakfast earlier in the day reached the height of sentiment for the women who attended. No one cried, but there were a lot of wet eyes as America's first woman representative concluded her remarks with:

"There will be many times when I will make mistakes. And I need your encouragement and your support. I know I will get it. I promise--I promise--"

A little catch in the throat; a barely perceptible trembling of the otherwise firm lips -- and "the lady from Montana" sat down, having made her first speech in the nation's capital. 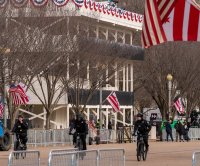 U.S. News // 3 hours ago
Capitol police arrest Va. man with fake ID, gun as officials brace for inauguration
Jan. 16 (UPI) -- Capitol police is Washington, D.C., said they arrested a Virginia man who tried to enter a restricted area and was found to have fake credentials and a loaded high-capacity magazine gun. 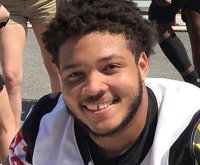 Science News // 4 hours ago
NASA's moon rocket roars to life during shortened test-firing
ORLANDO, Fla., Jan. 16 (UPI) -- NASA's plan to test its new moon rocket fell short of a scheduled eight-minute test-firing Saturday in Mississippi as the engines were shut down at just over a minute into the test. 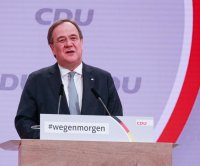 World News // 5 hours ago
Armin Laschet, Merkel ally, elected head of Germany's CDU party
Jan. 16 (UPI) -- German Parliament member Armin Laschet was elected leader of the Christian Democrats and may be next in line to replace Chancellor Angela Merkel when she steps down in September.